SEOUL/PAJU, June 8 (Joint Press Corps-Yonhap) -- A group of South Korean officials and civilians visited North Korea on Friday to prepare for the opening of a liaison office in the North's border city of Kaesong.

The 14-member team headed by Vice Unification Minister Chun Hae-sung took the western land route and crossed the military demarcation line at 8:34 a.m. for a trip to inspect possible locations and facilities.

This is the first time South Koreans have visited Kaesong since February 2016, when Seoul shut an inter-Korean joint industrial complex in the western border city following the North's missile and nuclear provocations.

"I believe the establishment of the liaison office between South and North Korea is the first step in implementing the Panmunjom Declaration and a significant measure for the sustainable development of South-North relations," Chun told pool reporters before departure at the customs, immigration and quarantine (CIQ) office in Paju.

He was referring to a summit declaration adopted by President Moon Jae-in and North Korean leader Kim Jong-un on April 27.

"We will thoroughly check the relevant facilities so as to launch the liaison office as soon as possible," he added. 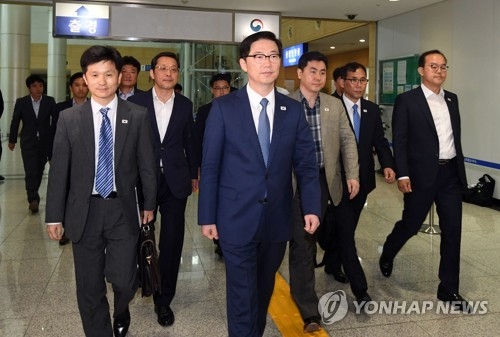 If preparations go as planned, the office is expected to be open as early as this month.

In a high-level officials' meeting last week, the two Koreas agreed to open the liaison office "at an early date" in anticipation of increased cross-border exchanges following the leaders' summit meetings in April and May.

The team also includes officials from KT, a telecom carrier, and Hyundai Asan, which played a key role in past inter-Korean economic cooperation projects, including the now-suspended factory park.

The joint industrial complex, launched in 2004, combined South Korea's capital with the North's cheap and skillful labor. It was hailed as a successful example of economic cooperation between the two Koreas.

Asked if the preparatory team plans to check the facilities in the Kaesong complex as well, Chun emphasized that his trip is focused on inspecting things needed for operation of the liaison office.

The unification ministry denied Thursday that the liaison office is related to the reopening of the industrial complex, which it said would be considered in tandem with progress in denuclearization of the North.

During a regular press briefing Friday, ministry spokesman Baik Tae-hyun said that one of the team's main tasks is to check the facilities necessary for daily work and life for South Korean personnel to be stationed in Kaesong once the liaison office starts its operations.