Lee made the remark during a meeting with Russia's Deputy Prime Minister Yuri Trutnev, who concurrently serves as presidential envoy to the Far Eastern Federal District. Trutnev arrived in Seoul on Wednesday for a two-day visit to attend a meeting of the Joint Committee on Economic, Scientific and Technological Cooperation between the two countries.

Noting that two-day trade volume between South Korea and Russia jumped 40 percent last year from a year earlier, and that people-to-people exchanges also reached a record high, Lee said he hopes the two countries will work closely together to further boost trade and exchanges.

Trutnev explained in detail the Far Eastern district's investment environment and the status of foreign investments, and said he hopes many Korean companies will make investments in the region, according to Lee's office.

Lee expressed gratitude for Russia's support for Seoul's efforts to bring peace to the divided Korean Peninsula and asked Russia to play a constructive role in realizing denuclearization and permanent peace on the peninsula. 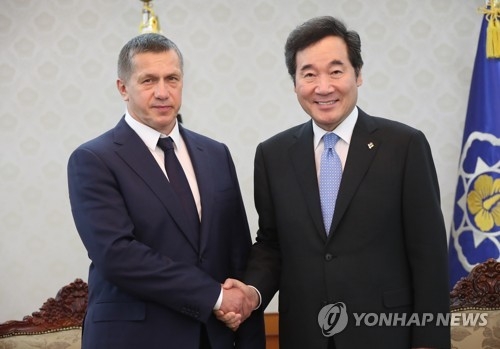