INNSBRUCK, Austria, June 7 (Yonhap) -- South Korea were held to a scoreless draw by Bolivia in a tuneup match ahead of the FIFA World Cup, putting on a lackadaisical performance just 11 days before their opening match in Russia.

The 57th-ranked South Korea had a stagnant, sluggish offense against the 59th-ranked Bolivia at Tivoli-Neu Stadium in Innsbruck, Austria. With Bolivia missing some of their top players to club commitments and willing to sit back and defend, South Korea appeared to play down to the level of their competition.

The result won't inspire any confidence in skeptical fans who foresee a short World Cup for the Taeguk Warriors.

South Korea have set up camp in Austria and will next play Senegal behind closed doors next Monday.

They will then fly to Saint Petersburg, their World Cup base, next Tuesday. In Group F action, South Korea will first face No. 24 Sweden on June 18, followed by No. 15 Mexico on June 23 and then top-ranked Germany on June 27. 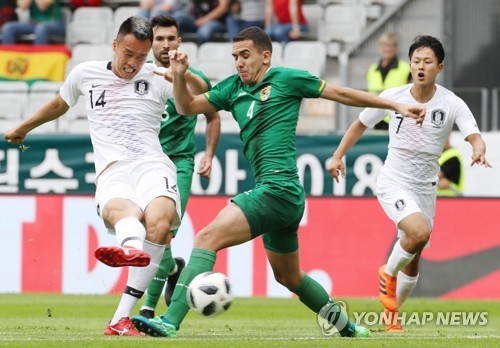 After experimenting and failing miserably with a 3-5-2 formation in a 3-1 loss to Bosnia-Herzegovina last Friday, South Korean head coach Shin Tae-yong returned to a 4-4-2 setting.

Center back Jang Hyun-soo returned to the lineup after sitting out two previous tuneup matches, anchoring the back line alongside Kim Young-gwon. Lee Yong and Park Joo-ho started as full backs.

Captain Ki Sung-yueng, who started on defense against Bosnia-Herzegovina, was back in his usual position as central midfielder, joined by Jung Woo-young. Lee Seung-woo and Moon Seon-min got the nods on the wings.

Kim Shin-wook got his first start in the runup to the World Cup at forward, starting next to Hwang Hee-chan, who made his third consecutive start. Son Heung-min, Tottenham Hotspur forward and South Korea's top offensive weapon, began the match on the bench.

Kim Shin-wook accounted for the majority of the South Korean offense in the scoreless opening half.

In the sixth minute, Kim took a feed from Hwang at the top of the box and fired a low shot that was parried aside by Carlos Lampe in the Bolivian net.

Towering over Bolivian defenders, the 197-centimeter-tall striker nearly scored a header in the 19th minute. Park Joo-ho sent a perfect cross for Kim from left, but Lampe dove to his right for a spectacular save to keep South Korea off the board. 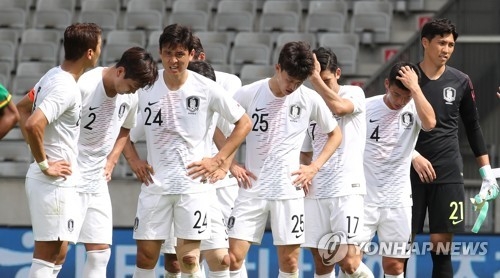 At the half-hour mark, Lee Seung-woo put in some great individual effort on the left flank to undress defenders and set up Hwang, who only managed a weak shot right at Lampe.

In the 38th, Ki dialed in from long distance, but Lampe was up to the task once again, stretching to his right to turn aside the shot that bounced just in front of him.

Bolivia hardly tested South Korea on defense in the first half, other than Leonel Justiniano's shot over the net following a defensive zone turnover.

South Korea's starting goalkeeper Kim Seung-gyu barely broke a sweat, and he was replaced by Kim Jin-hyeon to start the second half. In midfield, Moon, who looked shaky in the first half, was lifted in favor of Lee Jae-sung.

With South Korea unable to generate any offense to open the second half, Son entered the match in place of Lee Seung-woo near the hour mark. Slotted into the wing behind Hwang and Kim Shin-wook, Son tried to take matters into his own hands in the 68th, with a hard shot from the center of the box that forced Lampe to make another fine save.

For the rest of the match, though, South Korea looked even less threatening than in the first half. Their passes were often off target, and the forwards were mostly static in the box and weren't really moving away from the ball to create space for themselves.

South Korea managed to fire some shots in traffic in the dying moments but couldn't get them through the wall of defenders, let alone past Lampe in net. 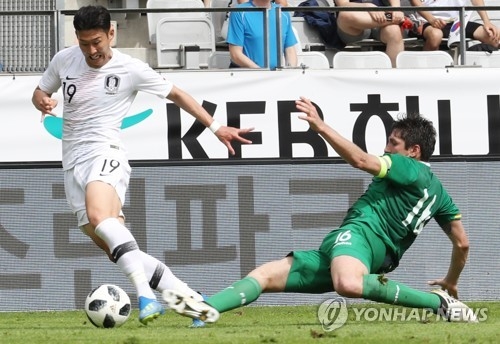