INNSBRUCK, Austria, June 7 (Yonhap) -- South Korea dominated ball possession with a familiar 4-4-2 formation in their World Cup tuneup against Bolivia on Thursday, but it was their poor finishing touch that forced them to settle for a scoreless draw.

With the 2018 FIFA World Cup only a week away, South Korea, led by head coach Shin Tae-yong, decided to go with a back four system against Bolivia at Tivoli-Neu Stadium in Innsbruck, Austria. Shin's side used a 3-5-2 formation against Bosnia and Herzegovina in their recent friendly match at home but suffered a 3-1 loss.

Kim partnered with Red Bull Salzburg's roving forward Hwang hee-chan up front. They were supported by two national team rookie attackers, Lee Seung-woo and Moon Seon-min, who are known for their pace and penetrating abilities. 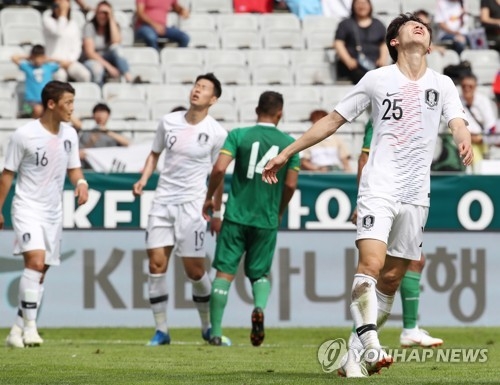 Like their previous matches with 4-4-2, South Korea produced promising opportunities mostly from the flanks, with full backs making overlapping runs and delivering crosses into the box. Wingers also penetrated space and cut inside into the box to make chances for teammates.

Using Kim's height appeared to be an effective choice against the inexperienced Bolivians, as he kept knocking at the opponents' door with his headers.

With no high defensive pressing from Bolivia, South Korea also showed their attacking power in the center. Hwang made runs to penetrate behind Bolivian defenders, while Lee Seung-woo cut inside from the flanks with his dribbles.

Helping these attackers from behind and making buildup was South Korean captain Ki Sung-yueng, who played in his usual anchorman position. In the Bosnia friendly, Ki was one of the three center backs, playing as a libero. Ki partnered with Jung Woo-young, who was given a more defensive role in the center midfield.

However, finding the back of the net was another matter as South Korea failed to score. 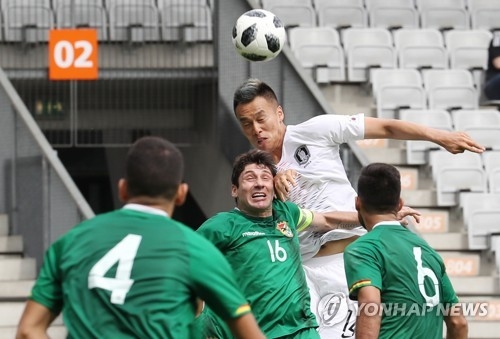 South Korea's center back duo of Jang Hyun-soo and Kim Young-gwon had no major problems in the first half as Bolivia didn't produce serious threats. Jang missed South Korea's last two friendlies due to an ankle injury but looked steady in his national team comeback.

South Korea replaced Moon with Lee Jae-sung to start the second half. Even though they dominated possession of the ball, the Taeguk Warriors failed to produce a dynamic performance on the pitch. They lacked delicate ball control near the box and struggled to create space.

In the 60th, South Korea put Son in for Lee Seung-woo, adding more pace and aggressiveness to the front line. Son played as a left winger, a position he has been mainly playing with his English Premier League club, Tottenham Hotspur. He, too, failed to hit the back of the net.

South Korea took out Kim Shin-wook for left back Kim Min-woo in the 81st. The substitution moved Son up front with Hwang, with Kim Min-woo playing as left winger.

South Koreans couldn't buy a goal, as no player showed much killer instinct until the final whistle. South Korea took more than 10 shots against Bolivia, but none of them went behind Bolivian goalkeeper Lampe.