SEOUL, June 7 (Yonhap) -- A gender equality ministry official slammed his car into the front gate of the U.S. Embassy in Seoul on Thursday and claimed he wanted to seek asylum in the United States, police said.

The 47-year-old official, identified only by his surname Yoon, was immediately taken into custody after crashing his sedan into the steel gate of the embassy in central Seoul around 7:22 p.m.

The front of Yoon's car was damaged, and the steel gate was bent inward. A woman who was riding in the car at the time complained of pain and was taken to a hospital, but no casualties were reported.

Police said Yoon is a director-level official at the Ministry of Gender Equality and Family. The ministry is located in Seoul's main government complex building across the street from the U.S. Embassy.

Police said Yoon went to work in the morning and left early after taking a half-day off.

Witnesses said Yoon's car was traveling on the boulevard in front of the embassy before it abruptly changed its direction toward the embassy.

As he was overpowered by police, Yoon shouted, "Help me!" several times.

Yoon later told police that he slammed the car into the embassy because he wanted to seek asylum in the U.S. due to reasons related to North Korea. No further details were immediately known.

A sobriety test showed Yoon was not drunk at the time.

Police are questioning Yoon on charges of special property damage. 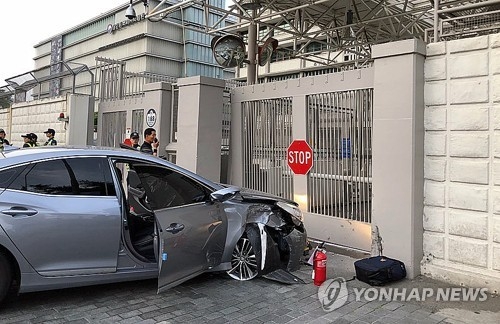