INNSBRUCK, Austria, June 7 (Yonhap) -- South Korea's attacking ace Son Heung-min on Thursday told a teammate to keep his composure on the pitch after their side was held to a scoreless draw by Bolivia in their World Cup tuneup match.

Son played as a second-half substitute in South Korea's friendly against Bolivia at Tivoli-Neu Stadium in Innsbruck, Austria. He replaced Lee Seung-woo in the 60th minute to compete in his 66th international match for South Korea.

After watching Hwang's performance from off the pitch, the Tottenham Hotpur forward apparently had some words of advice.

"I'm not in a position to say what other players should do, but I hope he (Hwang) can play with composure," Son said after the match. "He tried to make passes after one touch, but it didn't go smoothly. I hope he can hold the ball and play with confidence."

Son entered the match as a left winger but moved up front to play with Hwang after Kim left the pitch in the 81st minute.

The 25-year-old almost made a breakthrough for South Korea in the 68th after he dribbled past defenders and took a powerful right-footed strike just outside the box. His attempt, however, was stopped by Bolivian goalkeeper Carlos Lampe.

Son took a couple more shots later but failed to hit the back of the net.

"I tried hard, but it's a pity that we couldn't collect a victory," he said. "However, what are important are our matches at the World Cup. We'll try to concentrate more to play a good game."

South Korea are in Group at the 2018 FIFA World Cup in Russia, where they will face Sweden, Mexico and Germany. 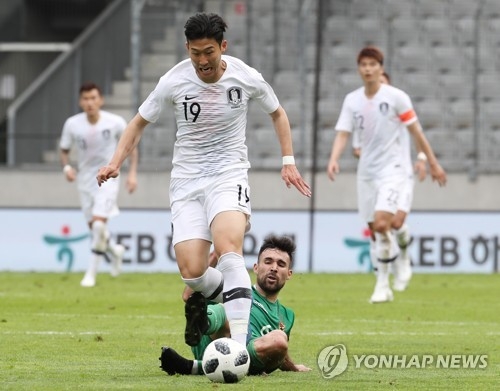