SEOUL, June 8 (Yonhap) -- CJ Logistics Corp. said Friday it has agreed to buy a U.S. logistics company for 231.4 billion won (US$216 million) in its latest drive to expand its presence in the North American market.

The South Korean firm signed the deal to purchase a 90 percent stake in DSC Logistics, Inc. on Thursday.

Founded in Illinois in 1960, the U.S. company is specialized in delivering consumer packaged goods and food products with over 50 logistics centers throughout the country. Its sales came to 578.4 billion won last year, according to CJ Logistics.

"Following our inroads into China and Southeast Asia, we are now beginning a full-fledged expansion into the U.S.," CJ Logistics CEO Park Keun-tae said in a statement.

The logistics arm of South Korea's food and entertainment conglomerate CJ has been accelerating its overseas expansion since 2013, carrying out active mergers and acquisitions in China and Southeast Asia, including Malaysia, Indonesia and Vietnam.

The latest deal marks its first acquisition in the Americas. CJ Logistics operates 15 logistics centers in the United States, Canada, Mexico and Brazil. 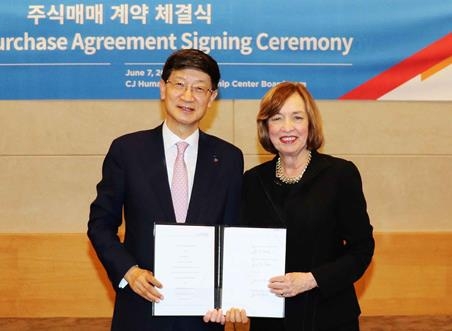