SEOUL, June 8 (Yonhap) -- The Ministry of Education said Friday it has asked the prosecution to investigate 17 people, including five former presidential officials, involved in the publication of state-authored history textbooks under the previous Park Geun-hye administration.

The ministry wrapped up its monthslong internal inquiry into the allegations that they abused power in pushing for the introduction of government-issued history textbooks in high schools. They were widely criticized for rightist bias and distortion of facts largely related to her father Park Chung-hee's 18-year dictatorial rule.

In 2015, Park ordered a rewrite of the history books to remove "left-leaning" content and correct history education.

The liberal Moon Jae-in government last year scrapped the policy and the education ministry began an internal inquiry into suspected illegal acts by the officials who were in charge of the textbooks.

The inquiry has found the officials fabricated results of a public opinion survey about the history textbooks and were involved in other misdeeds.

The ministry filed complaints with the prosecution against five former presidential aides, eight then education officials and four staff from a public relations agency. It will also request disciplinary measures for six others at the ministry and affiliated organizations.

But the ministry took no action on the former president, citing their limited investigative authority.

In May, the ministry announced it will announce new guidelines for high school history textbooks by next month. 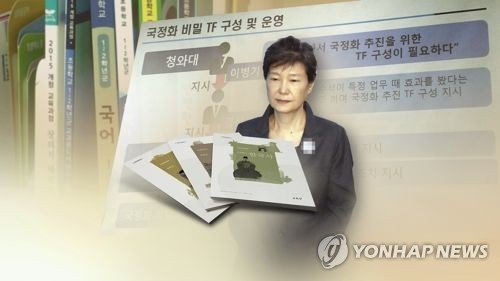