Chung Jae-hoon, the CEO of the Korea Hydro & Nuclear Power Co. (KHNP), said every effort is being made to search for opportunities in "strategic markets," including Czech Republic, Slovakia, Poland and the Philippines.

"We will knock on any door, seeking whatever benefits we can get," Chung said in a meeting with reporters in the southeastern coastal city of Ulsan, the home of the Shin Kori 3 nuclear reactor, on Thursday. "The Korean nuclear industry can survive as long as it finds ways to complement it business model."

South Korea has 24 nuclear reactors, which generate about 30 percent of the country's electricity, but Seoul has vowed to boost the supply of power from clean and renewable energy sources while reducing reliance on nuclear and coal-fired plants.

The energy transformation policy has directly hit the KHNP, which earns most of its profits from its electricity sales to the Korea Electric Power Corp., its parent company. 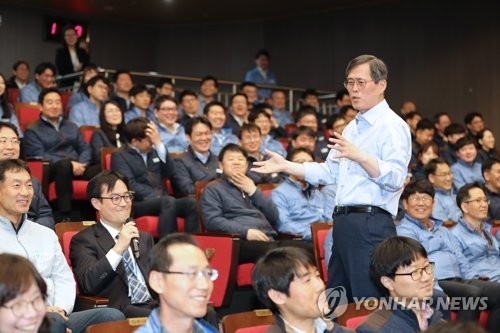 "In the past, the KHNP could make profits only by operating nuclear reactors. But whether we wanted it or not, we were hit by an external shock," he said. "As we were forced to make changes, it made us go to the open ocean and seek new opportunities."

The company forecast a rise in electricity sales this year over last year to 10.25 trillion won but expected the gain to be eroded by the lower use of reactors and the general rise in operational costs.

"We are going through some hard times right now, but will show a better performance next year," he said.

In addition to exports of nuclear reactors, the chief executive said his company will explore ways to increase profits from other sources, including energy consulting, maintenance and data management.

"Though the hardware business is the firm's cash cow right now, it's time to start making efforts to become a company that can provide consulting services and big data, based on 35 years of business knowhow, to emerging nations," he said.

The KHNP has been vying for a nuclear plant construction project in Saudi Arabia, seeking the second chance to tap into the Middle East market following a $20 billion contract with the United Arab Emirates in 2009.

Czech Republic is expected to announce a financing plan for a nuclear project later this year, while the Philippines is pushing again for the revival of its mothballed nuclear power plant to meet growing energy demand in the fast-growing economy.