LEOGANG, Austria, June 8 (Yonhap) -- South Korea on Friday denied rumors of a rift between two national football team players after they appeared to be exchanging heated words during their World Cup tuneup against Bolivia.

The Korea Football Association (KFA) said Son Heung-min and Jung Woo-young having a fierce argument during Thursday's match against Bolivia in Innsbruck, Austria, is a "misunderstanding."

After South Korea were held to a scoreless draw by Bolivia at Tivoli-Neu Stadium in Innsbruck on Thursday, some South Koreans fans pointed out that there was a dispute between Son and Jung.

Near the end of the match, Son was spotted speaking to Jung, who then replied back to his teammates with a frowning face. Kim Young-gwon, who was standing between the players, appeared to be holding back Jung.

Such actions brought rumors in the online football community that South Korea is falling apart. The KFA, however, denied that there was a serious verbal lashing between the players.

"In a free kick situation before the final whistle, Jung was supposed to pass the ball to Son, but they couldn't execute it well at the right time," a KFA official said. "Son later told Jung with a smile it would've been better if he kicked the ball a little late."

The official said Jung, a defensive midfielder playing with Vissel Kobe in Japan, was not mad at the Tottenham Hotspur forward.

"Jung told Son that he thought Son was going to make a run when he kicked the ball," the KFA official said. "The reason why Jung frowned was that he was physically tired as the match was nearing an end."

The KFA said both Son and Jung are playing down rumors of the on-pitch dispute.

"The two players are not taking the situation seriously, thinking it's just one of those occasions."

South Korea are in Group F at the 2018 FIFA World Cup, with Sweden, Mexico and Germany. 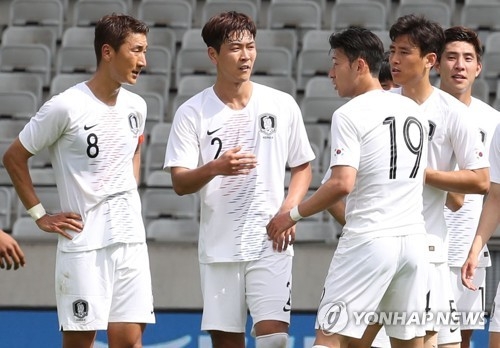