SEOUL, June 8 (Yonhap) – With five days to go before South Korea's local elections, political scandals, allegations of illicit romance and talk of alliance among old foes are heating up races in key battlegrounds.

Up for grabs in the June 13 elections are leadership of 17 metropolises and provinces and about 4,000 local administrative, legislative and educational posts.

The ruling Democratic Party is confident of sweeping victories across the country, even in some of its main rival's strongholds in the southeast, as indicated by various polls.

The main opposition Liberty Korea Party is struggling to avoid disaster, pinning hopes on "shy conservatives" and what it sees a sign of undecided voters slowly turning in its favor.

With local powers at stake, the nationwide polls are the first electoral test for President Moon Jae-in since taking office in May last year. 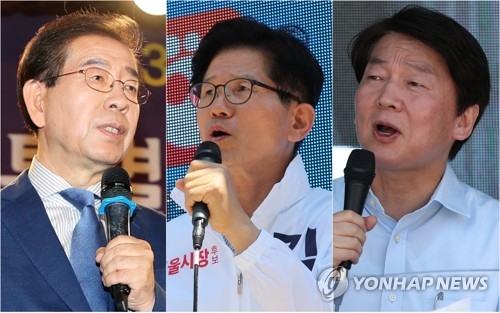 The biggest battleground is the capital Seoul, where some 20 percent of the country's population of 52 million resides.

Recent polls show incumbent Mayor Park Won-soon, who is seeking a third term, clearly ahead of his rivals.

Despite speculation that Kim and Ahn may seek a single candidacy, they have failed to narrow their differences. Both sides are demanding that the other party drop their bid to make way for a unified candidacy.

Ahn was one of the fiercest critics of the LKP when he ran for president in 2017.

Ahn was a front-runner ahead of the 2011 by-election for Seoul mayor, but dropped his bid and supported Park. Now, he is strongly critical of Park's performance in office over the past seven years.

Park is playing down the impact of his two rivals' potential merger, saying the move would not appeal to voters.

"It is important to win the hearts of citizens in any election. So an act that is motivated only by purposes for winning an election would not affect an election," Park told reporters on Tuesday.

The position of Seoul mayor holds extra weight as it is often deemed a stepping stone to the presidency. Now-jailed former conservative president Lee Myung-bak led the Seoul metropolitan government in 2002-2006. 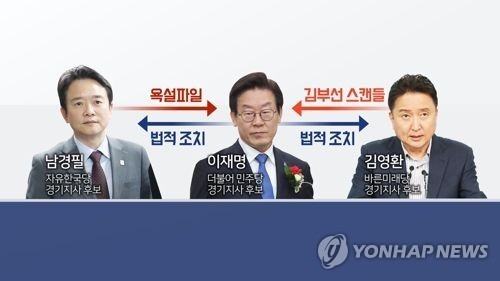 In the Gyeonggi Province gubernatorial election, negative campaigns are in full swing, targeting Lee Jae-myung of the ruling Democratic Party (DP). Lee is a former mayor of Seongnam near Seoul.

During TV debates last month, Kim Young-hwan of the opposition Bareunmirae Party accused Lee of maintaining an extramarital relationship with Kim Bu-seon, an actress, while pretending not to be married.

The candidate Kim called on Lee Thursday to apologize to the public, claiming that he was misrepresenting his private life and that he had placated her into telling the media that the allegations are not true. Lee has flatly denied the allegations.

Meanwhile, Nam Kyung-pil of the LKP slammed Lee for hurling invectives, including sexual vulgarisms, over the phone to his elder brother and the brother's wife in 2012.

In return, Lee's camp raised the suspicion that Nam made speculative land investments on the country's southern Jeju Island.

Lee is leading the race with a support rate of 48.6 percent, followed by Nam, the current governor, with 19.4 percent, according to the latest pre-election polls released by three TV broadcasters.

But the scandal involving the actress is seen as a disgrace for Lee, who apparently has aspirations for the presidency. He ran as a candidate for the DP's in-house race for the 2017 presidential election. 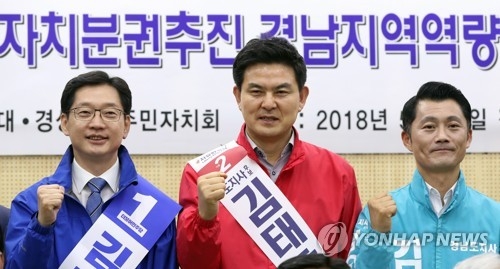 Another focal point is South Gyeongsang Province, a traditional conservative stronghold where the campaign of gubernatorial frontrunner Kim Kyoung-soo, a close aide to President Moon Jae-in, has been complicated by an online opinion rigging scandal.

The scandal centers on allegations that Kim knew and communicated with a power blogger known by the nickname Druking, who allededly rigged online comments on news stories in a bid to sway public opinions on hot-button political issues.

On May 21, the National Assembly passed a bill on the appointment of a special counsel to probe the scandal. The blogger claimed that Kim tacitly agreed to his campaign for the online comment rigging, an allegation flatly denied by the ex-lawmaker.

Pre-election opinion polls show that Kim thus far appears not to have been affected by the scandal.

Kim earned a support rate of 43.4 percent, compared with 27.2 percent for Kim Tae-ho, a former two-term lawmaker of the LKP, according to the latest survey by the broadcasters.