SEOUL, June 8 (Yonhap) -- South Korean chip and battery makers should brace for rising challenges as China is stepping up efforts to foster its own industry to reduce its reliance on imports, Seoul's industry minister said Friday.

Paik Un-gyu, minister of trade, industry and energy, shared the concerns with representatives of local chip and battery makers after returning from his trip to Beijing earlier this week.

"South Korean companies have the leading technology in the rechargeable battery and semiconductor sectors. As first movers, it is time to create strategies to maintain the lead from the pursuers," the policymaker said in a meeting with senior officials from Samsung Electronics Co., SK hynix Inc., LG Chem Inc. and Samsung SDI Co.

"The Chinese government is making efforts to develop its semiconductor industry as the inbound shipment of memory chips far surpassed that of crude oil," Paik said. "Korean battery makers are threatened as China is acquiring the secondary battery technology from its giant electric vehicle market and fostering domestic manufacturers." 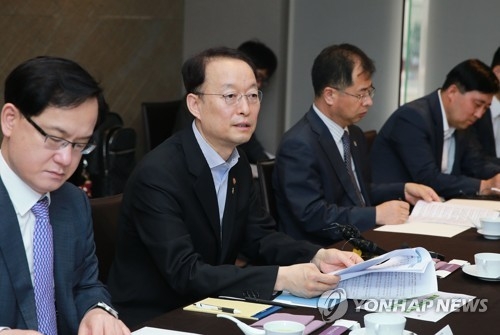 Paik said the government will collaborate with local industries to cope with regulatory moves in China, while expanding investment for research and development of next-generation technologies to tackle the challenges.

During his China visit Tuesday, Paik called on China to fairly carry out an antitrust probe into two Korean chipmakers as its regulators are reportedly looking into their alleged price fixing.

China's antitrust agency has been checking South Korea's Samsung Electronics and SK hynix and the U.S.' Micron Technology amid the continuing rally in memory chip prices. The three companies together control more than 90 percent of the global DRAM market.

While the Chinese government hasn't formally announced what they are investigating, industry observers see the move as aimed at driving down prices of memory chips and pressuring Washington amid trade disputes.

China, a major production hub for handsets and other electronic devices, is the single largest semiconductor market in the world. DRAM prices have rallied steadily since 2016.

Last month, Seoul also brought up Beijing's policy stance of excluding electric vehicles equipped with South Korean batteries from its subsidies list, which is a critical issue for local lithium-ion battery manufacturers, such as Samsung SDI and LG Chem.

Given the two firms' battery production capacity and global competitiveness, industry watchers viewed the decision as a thinly veiled retaliation against Seoul's deployment of an American missile defense system on its soil in March 2017.

South Korean battery manufacturers have struggled in the Chinese market as the Chinese government began to withdraw subsidies for local electric cars that use Korean batteries in late 2016. State subsidies can cover as much as half of the price of the cars sold in the world's No. 1 electric vehicle market.