SEOUL, June 8 (Yonhap) -- Foreign investors remained net sellers on the South Korean stock market in May for the second consecutive month, but the amount of selling decreased, the central bank said Friday.

Foreigners offloaded US$350 million worth of local shares in May, according to the Bank of Korea (BOK). They dumped $2.04 billion in April, following purchases of $170 million the previous month.

On the bond market, however, offshore investors bought $3.05 billion, having stayed net buyers since January.

In total, foreigners purchased a net $2.7 billion worth in the local equity market last month.

Meanwhile, volatility in South Korea's currency markets narrowed slightly in May from a month earlier as the local currency lost ground against U.S. dollar.

On average, the Korean won posted 3.6 won in daily value changes against the U.S. greenback last month, down from 4.0 won in March.

The won finished at 1,070.7 won against the greenback on Tuesday, compared with 1,068 won at the end of April, the BOK said.

The credit default swaps premium for foreign exchange stabilization bonds came to 43 basis points in May, down from April's 49 basis points, the bank added. 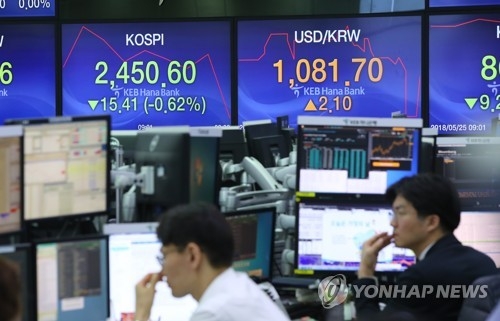