Moon will embark on a three-day visit to Russia on June 21 for a summit with Russian counterpart Vladimir Putin, spokesman Kim Eui-kyeom told a press briefing. He did not provide the summit date. 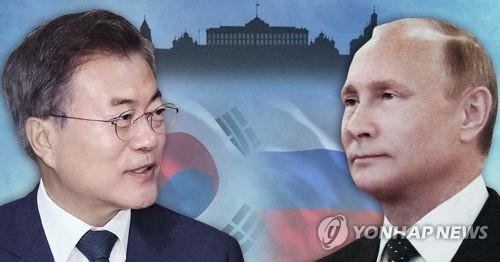 "The purpose of the state visit will be to discuss ways to increase the country's practical cooperation with Russia, which is at the center of the New Northern Policy," he said, adding it will be the first state visit by a South Korean president in 19 years.

The New Northern Policy, along with the New Southern Policy, is a key foreign relations policy of the Moon Jae-in administration, under which the country seeks to greatly improve its ties with its Eurasian neighbors.

The Moon-Putin summit will also focus on ways to rid North Korea of its nuclear ambition as it will follow a historic meeting between U.S. President Donald Trump and North Korean leader Kim Jong-un, set to be held Tuesday in Singapore.

He will then fly to the southwestern city of Rostov-On-Don to watch the FIFA World Cup match between South Korea and Mexico.

He will return home June 23.