SEOUL, June 8 (Yonhap) -- Police said Friday the man who rammed a car into a gate of the U.S. Embassy in Seoul a day earlier has a history of being treated for mental illness.

The 47-year-old surnamed Yoon, an official with the Ministry of Gender Equality and Family, has been booked on the count of special property damage after he slammed a sedan into the front gate of the embassy building in central Gwanghwamun around 7:20 p.m. on Thursday.

He claimed he wanted to seek asylum in the United States, saying he's been involved in affairs related to North Korea. The crash damaged the car and the embassy gate.

Police said Friday that Yoon has admitted to the crime and said he was "out of his mind and haunted by a ghost."

"He told us he had this delusion that he could go to the U.S. if he seeks asylum by ramming the embassy gate," a police officer told reporters.

Yoon's medical history shows he has been treated twice for delusion, police said. He said his symptoms became worse after he was selected as a candidate for overseas study sponsored by the ministry and that he began to study English again.

He also said he had had trouble sleeping for three consecutive nights after he gave up on an English proficiency test because he had a headache.

"But his claim about being involved in North Korea affairs and therefore seeking asylum appears to lack merit," the police official said.

The sedan he drove into the gate turned out to be owned by a woman who was riding in the front passenger seat at the time. The woman, identified only by her last name Roh, is a former lawyer who has known Yoon through work at the ministry.

She told police she met Yoon that night after he called her and said he needed counseling. She let him drive because he insisted he be behind the wheel. 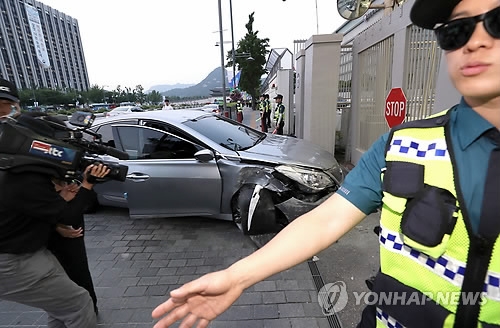