The Moon Jae-in government is preaching growth centered on innovation, which it claims will help Asia's fourth-largest economy secure potential growth and allow for sustainable expansion that can benefit everyone.

"We, as a retailer, always have a sense crisis, not only because of the uncertainties surrounding the economic environment but also because our consumers are quickly changing in keeping with the rapid growth of mobile shopping, overseas direct purchases and the increase in the number of single-person households," Chung said.

"Not only for the sake of our growth but also for the national economy, I believe that innovative growth centered on business groups is essential," he said.

The finance minister said the country's job additions may be below the 200,000 level in the first half of the year. The government aims to create 300,000 jobs this year.

Between February and April, 100,000 new jobs were added, with an average of 168,000 positions created every month so far this year, spawning speculation that the government may lower its job creation target.

Meanwhile, Shinsegae plans to spend 9 trillion won (US$8.36 billion) and hire 10,000 employees annually over the next three years, according to the finance ministry.

Shinsegae has already spent a total of 2.6 trillion won annually over the past five years.

The business group also said it will provide some 600 billion won worth of financial help to its suppliers and will seek to work together with smaller retailers to achieve coprosperity, according to the ministry. 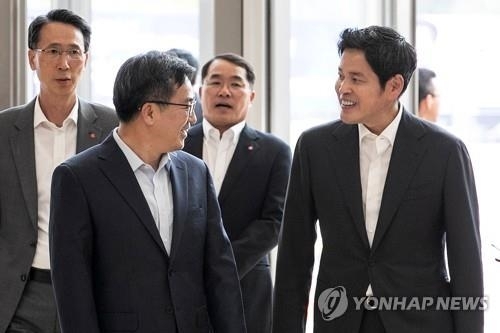