SEOUL, June 8 (Yonhap) -- A group of former top officials and political leaders in South Korea issued a statement Friday, calling on North Korea and the United States to agree to the complete, irreversible and verifiable denuclearization of the Korean Peninsula at their upcoming summit.

The statement from the Conference for Peace in East Asia also demands that the two countries terminate the Korean War Armistice Agreement, remove reasonable concerns about security for North Korea's regime and lift sanctions against the North. 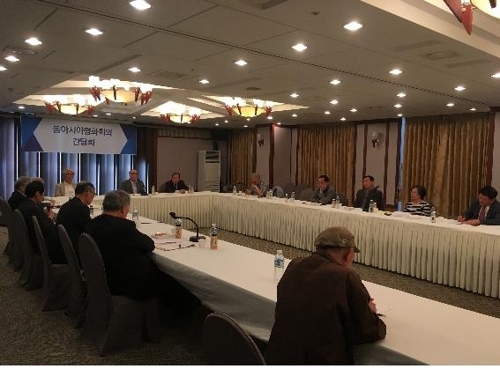 "North Korea and the U.S. should do their best to conclude the denuclearization negotiations as swiftly and concisely as possible," said the statement, welcoming next Tuesday's summit between North Korean leader Kim Jong-un and U.S. President Donald Trump in Singapore.

"We welcome a push by the two Koreas and the U.S. to declare an end to the Korean War for the sake of the complete and permanent denuclearization of the North and the elimination of its security concerns."

The seniors then urged South Korea's political parties to refrain from wrangling, particularly at this historical turning point for peace on the Korean Peninsula.

They also asked that China, Japan and Russia, which have critical interests in peace on the Korean Peninsula and East Asia, be given greater opportunities to contribute to the great transformation on the peninsula.

"As seniors of South Korean society, it's our ardent wish not to hand down the pain of war to the next generation," the statement said.