SEOUL, June 8 (Yonhap) -- A Japanese civic group has collected more than 10 million yen (around US$92,743) to help a South Korean think tank construct a museum on the history of Japan's 1910-45 colonization of the Korean Peninsula, the think tank said Friday.

The Seoul-based Center for Historical Truth and Justice said the Japanese group, known as the Society Connecting the Colonization History Museum to Japan, will donate the money gathered from 800 Japanese people and 12 civic bodies to the center the next day.

Twenty people from the group, including its co-leader Yuka Anjako and its secretary general Hideki Yano, are set to attend a ceremony in Seoul marking the donation.

After its inauguration in November 2015, the Japanese group launched a campaign to collect funds to back up the South Korean think tank's project to establish the museum in Seoul's Yongsan Ward in time with the 108th anniversary of Korea on August 29.

In 2016, the group distributed 40,000 pamphlets on the project across Japan to ask people to contribute to the campaign.

Out of the 800 contributors, one Japanese man gave more than 1 million yen in the name of his mother. "His mother, who was a teacher at an elementary school in the city of Incheon, west of Seoul, during the colonial days, has a bitter memory of when she had to bid farewell to her graduates of the school as they were mobilized as laborers for wartime Japan," Yano said. 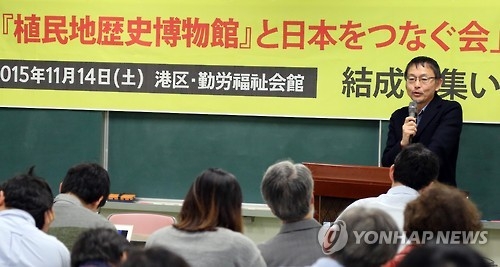