SEOUL, June 10 (Yonhap) -- Yuhan-Kimberly Ltd., a maker of sanitary products in South Korea, indicated Sunday that it could provide seedlings to North Korea if South and North Korea agree to join hands for a forestation project in the North.

Yuhan-Kimberly said it will provide seedlings to ensure they can be planted in North Korea or the demilitarized zone between the two Koreas after 210,000 seedlings are released from its tree nursery in Hwacheon County near the border with North Korea in autumn.

"We need to restore the ecosystem on the Korean Peninsula through forestation in North Korea," a Yuhan-Kimberly official said.

Last month, the Korea Forest Service launched a task force for a forestation project in North Korea. The state-run forest agency also plans to set up a tree nursery and a facility to store seeds in the eastern border city of Goseong by next year.

The move is part of forestry cooperation projects between the two Koreas following the summit of their leaders in April.

About 32 percent of North Korean forests have been destroyed, and the country has the third-worst deforestation among 180 countries, according to Seoul's unification ministry handling inter-Korean affairs.

Mountains in North Korea are believed to have suffered severe deforestation, especially since famine swept through the impoverished nation in the mid to late-1990s, when people cut down trees for fuel and to extend farmland.

Experts have said severe deforestation is one of the reasons behind devastating floods that hit North Korea in recent years. 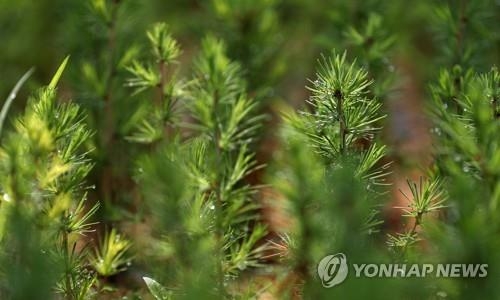