Reports of Kim's latest on-site inspection came as Pyongyang's media have kept mum on the recent U.S. visit by his right-hand man, Kim Yong-chol, for a rare meeting with Trump at the White House.

Kim, accompanied by his wife Ri Sol-ju, looked around the Pyongyang restaurant's dining halls and other facilities before expressing satisfaction, according to a report from the Korean Central News Agency (KCNA). 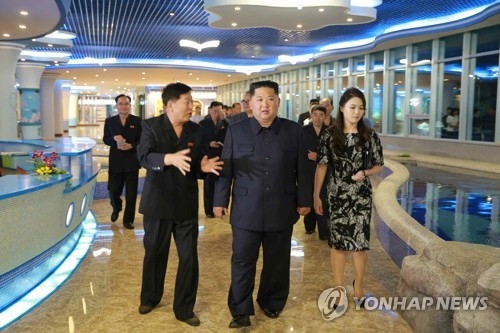 "Another landmark restaurant on par with Okryu-gwan has been born in Pyongyang," Kim was quoted by the KCNA as saying, referring to the existing restaurant famous for Pyongyang-style cold noodles and other Korean food.

The report didn't reveal the exact date of Kim's visit amid reports that his arrival in Singapore is imminent ahead of the June 12 summit.

Kim declared a shift in his policy focus to the economy at the party's plenary Central Committee meeting on April 20. Until then, the impoverished North had pursued the so-called Byungjin policy of developing both the military and the economy.

After Kim's declaration, top North Korean officials have noticeably increased economy-related activities and field inspections. Choe Ryong-hae, vice chairman of the North's State Affairs Commission, visited cooperative farms, a fish farm and a food factory in regions south of the capital this month, following his earlier visits to an auto assembly plant and a foodstuff factory in late May.