The two reporters, whose identities were not disclosed, were investigated by Singaporean police on suspicion of entering the residence of the North Korean ambassador in Singapore without permission to report on the upcoming historic summit between U.S. President Donald Trump and North Korean leader Kim Jong-un slated for June 12.

The Singaporean government is said to have ordered the two to leave the country within the day.

During the prime-time nine o'clock news on Friday, the network reported that its journalists were being investigated by Singaporean authorities on charges of trespassing onto the residence.

"We respect the decision by local police and law enforcement. We sincerely apologize for failing to report with prudence at a sensitive time ahead of the U.S.-North Korea summit," the network said.

More than 300 South Korean reporters plan to visit Singapore to cover the summit, according to the Korea Press Foundation. 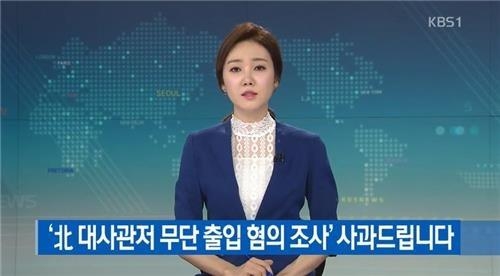