The latest findings of the largest publicly traded companies revealed the world's largest producer of computer chips and smartphones trailing only Apple Inc. among information technology companies and was the only South Korean business to make the top 100 list.

The Cupertino, California-based Apple stood at eighth place this year, with the Industrial and Commercial Bank of China Ltd. coming in at the top of the pile among companies from 60 countries. Samsung outpaced such IT giants as Microsoft Corp., Intel Corp. and Facebook in the report that checks sales, profits, assets and overall market value.

Samsung Electronics stood at 11th place in terms of sales, fourth in profits, 114th in assets and 12th in market value this year.

The latest Global 2000 showed Toyota Motor Corp. ranking 12th, the highest among non-Chinese Asian companies, with the top 10 being dominated by Chinese and U.S. financial firms, such as China Construction Bank and JP Morgan Chase & Co. 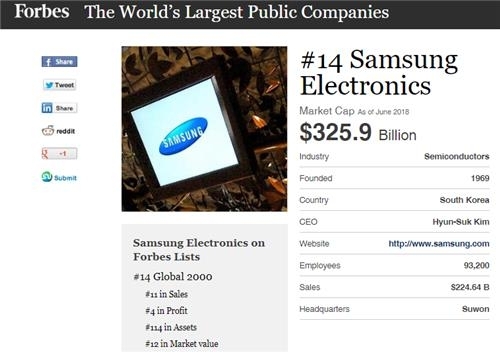