BEIJING, June 10 (Yonhap) -- A Chinese private jet left North Korea on Sunday about an hour after it landed in the North's capital, a flight route-tracking website showed.

The takeoff by an Air China airplane was detected at the airport in Pyongyang at 8:30 a.m., according to Flightradar24. The website said earlier the same plane had landed in the North's capital at 7:20 a.m., after leaving Beijing Capital International Airport at 4:18 a.m.

As to who boarded the plane from the communist state was unknown, but speculation is growing that it might be flying North Korean leader Kim Jong-un to Singapore, two days ahead of the historic summit with U.S. President Donald Trump in the city-state.

No other flights were detected from the North, according to the website.

The website reported late Saturday that another Chinese airplane landed in Singapore after leaving Pyongyang, in what experts and watchers predicted may be North Korea's advanced team for the summit talks. 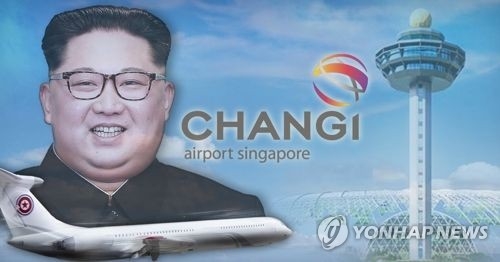