SEOUL, June 10 (Yonhap) -- The gap between key South Korean and U.S. interest rates will widen further if the U.S. Federal Reserve raises its key rate again this week, a move that would rekindle worries of capital outflows, according to analysts Sunday.

Currently, South Korea's base rate stands at 1.5 percent, the same as the lower end of the U.S. policy rate. Traders have expected the Fed to raise its key rate by a quarter percentage point to a range of 1.75 percent to 2 percent this week.

The current interest rate reversal is estimated to have had little impact on the South Korean financial market, but some analysts voiced concerns that a capital outflow is likely if the rate gap is further widened.

Goldman Sachs economist Kwon Goo-hoon told a forum last week that the rate gap between Korea and the United States is unlikely to cause a capital outflow, but an outflow of funds from Korea is possible in case of a capital flight. 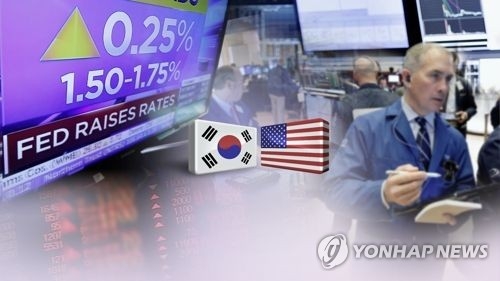 South Korea suffered a net capital outflow of 8.2 trillion won (US$7.65 billion) from the local stock and bond markets between May and July 2006, when the U.S.-South Korean rate gap stood at 1 percentage point.

That translated into a monthly average of 2.7 trillion won, nearly thrice the amount of capital outflow when the rate difference was 0.5 percentage point or below.

The U.S. central bank is widely expected to jack up interest rates three times this year, while the Bank of Korea is tipped to raise rates once or twice.

Such expectations have sparked concerns that the U.S.-South Korean interest rate difference could rise to 0.75 percentage point this year.

Lee Chang-seon, a senior researcher at LG Economic Research Institute, said there is a possibility that the Bank of Korea could raise its key rate in July.
(END)