The Brewers announced Sunday (local time) that Choi would be shipped back to the Triple-A Colorado Springs before the start of the road series finale against the Philadelphia Phillies. Brandon Woodruff, the scheduled starter for the game, replaced the South Korean on the 25-man roster.

In Saturday's game, Choi hit a pinch-hit, go-ahead grand slam that put the Brewers ahead 6-3 in the sixth inning. The Brewers went on to win the game 12-3.

It was Choi's second homer of the season, during which he's had three different stints with the Brewers. 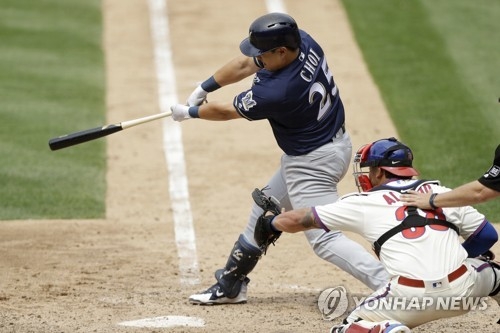 The 27-year-old made the Opening Day roster but was optioned to Triple-A after just one game. With injuries to first baseman/outfielder Ryan Braun in mid-May, Choi was brought up for a five-game stretch, during which he went 3-for-14 with a home run and an RBI.

Choi was called up earlier this month ahead of the Brewers' five-game interleague road trip against the Chicago White Sox and the Indians, so that he could serve as the designated hitter. He started four of those five games as DH but went just 1-for-13 with seven strikeouts.

Choi, first baseman/outfielder, stayed with the Brewers as they returned to National League action and went 2-for-2 with the slam in two games against the Phillies.

But he will likely stay in Triple-A for the foreseeable time once regular first baseman Eric Thames returns from his left thumb injury this week as expected.