Choo went 1-for-5 with two RBIs against the Houston Astros, which beat the Rangers 8-7 at Globe Life Park in Arlington, Texas, on Sunday (local time).

Choo has now reached base safely in 26 consecutive games, nine shy of his personal best, which was set over the 2012 and 2013 seasons.

Batting leadoff and playing in left field, Choo kept his streak alive in the second inning, driving in two runs with a single off Houston starter Dallas Keuchel. He grounded out to Keuchel in the first, and hit into line outs in the fourth and the fifth. He struck out in his final at-bat in the eighth.

Choo had a 12-game hitting streak snapped last Thursday. He has at least a hit in 17 of his past 20 games. 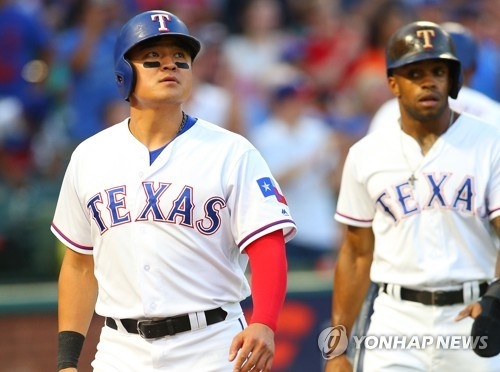