SEOUL, June 11 (Yonhap) -- K-pop superstars BTS was nudged out of the top 10 on the Billboard 200 most popular albums chart after topping it two weeks earlier, according to Billboard on Monday.

"Love Yourself: Tear" landed out of the top 10 for the third week of June, according to the Billboard website's preview of the chart, posted ahead of an official chart update set for June 12. Kanye West's "Ye," released on June 1, topped the Billboard 200 chart.

The latest BTS record landed atop the 200 album list in the week starting May 27, a little more than a week after the unveiling of the 11-track album, making the septet the first South Korean act to top a Billboard music chart. The following week, it slipped to sixth place.

The album's title track, "Fake Love," started off in the 10th spot on the most competitive Billboard chart of the hottest 100 songs last month before coming down to the 51st spot the next week. 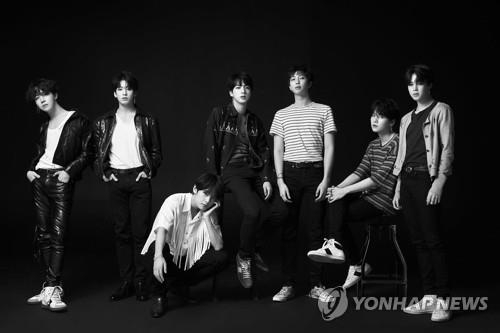 This followed the boy band's second winning of the Billboard award at the Top Social Artist category in the Billboard Music Awards earlier in May, an unprecedented feat for artists from outside of the United States and Canada.

Loaded with social messages and artistic prowess, the success of "Love Yourself: Tear," the third in the BTS' four-phase "Love Yourself" series, opened a new chapter for K-pop artists, whose successes have often been attributed to local entertainment conglomerates' mechanical production chains.

Their agency Big Hit Entertainment said that with the past four weeks of TV and stage appearances, BTS wrapped up their official promotion of the latest album.

Marking the fifth anniversary of their debut, BTS will host a meet and greet at the Blue Square concert hall Wednesday before embarking on an area tour of 11 North American and European cities in the latter half of 2018, according to the agency.