SEOUL, June 11 (Yonhap) -- The number of stock trading accounts in South Korea has reached a record high on the back of state efforts to boost the secondary bourse and on upbeat investor sentiment over a thaw in inter-Korean relations, data showed Monday.

The number of trading accounts stood at 26.11 million as of last Thursday, up 5.4 percent from 24.77 million accounts at the end of last year, according to the data from the Korea Financial Investment Association (KOFIA).

The figure has been rising steadily this year, reaching 25.15 million at the end of January and 25.28 million in March, according to the KOFIA.

Despite lackluster stock performance, more investors, mostly individuals, have rushed to the market for risky assets, as the government has been pushing for a variety of measures to revitalize the tech-laden KOSDAQ market, such as the release of the Kosdaq Venture Funds, to boost long-term investment and support smaller firms and start-ups.

"Investor sentiment appears to be buoyed by eased tensions on the Korean Peninsula, which has led to a surge in prices for shares related to inter-Korean economic cooperation," Kim Sung-hwan, an expert at Bookook Securities, said.

According to the analysis by the Korea Exchange, shares of companies that are expected to benefit from better inter-Korean ties have spiked this year thanks to the strong buying by retail investors.

The relations between the two Koreas have greatly improved, with the leaders holding two rounds of summit talks this year. On Tuesday, U.S. President Donald Trump and North Korean leader Kim Jong-un will hold a history-making meeting in Singapore. 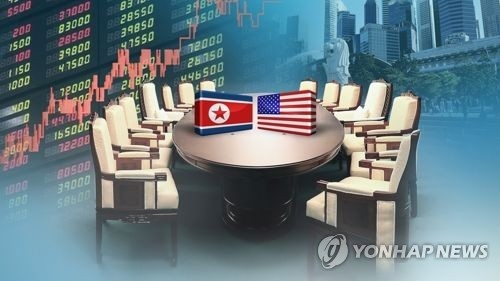