SEJONG/SEOUL, June 11 (Yonhap) -- Low-income nonregular workers at small businesses in South Korea have seen their wages drop steadily for nearly a year despite the minimum wage hike, mainly due to the decline in working hours, data showed Monday.

The monthly wages of temporary workers in such establishments as restaurants and bars with five to nine employees declined on-year for 11 straight months from May 2017 to March this year, according to the data from the Korean Statistical Information Service (KOSIS).

Industry observers said the decline in the workers' wages is mainly attributable to the drop in working hours. Temporary employees' working hours have been on the decline during the cited period, according to the data.

The government said the hike is aimed at income-led economic expansion and a reduction of the pay gap between workers, but there has been criticism that the increase is hurting entry-level jobs and weighing down the local economy. 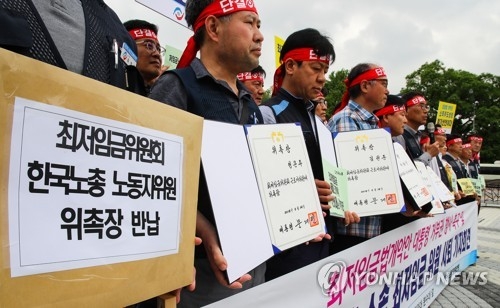 Temp salaries at small businesses down for 11th straight month

Temp salaries at small businesses down for 11th straight month