SEOUL, June 11 (Yonhap) -- South Korean workers have mixed feelings about the 52-hour maximum workweek due to effect next month as it could help improve productivity but reduce income, a survey by a local employment portal site showed Monday.

In a recent survey of 905 workers at companies with more than 300 employees, Job Korea found the respondents expected productivity to improve the most, but they also expressed concerns over a decrease in payments for overtime work.

On the positive side, 50.4 percent of the respondents picked improved productivity as the biggest merit of reducing the maximum workweek from 68 hours to 52, the job service firm said in a statement.

They also said the shortened workweek would be a key factor in achieving a good work-life balance, it said.

On the other hand, 55.2 percent of the respondents replied that they are more concerned about having to work overtime after the reduced workweek takes effect but not receiving overtime pay, the statement said.

In 2016, South Koreans reportedly worked 2,069 hours each on average, one of the highest figures among member countries of the Organization for Economic and Cooperative Development.

Seeking to improve quality of life and generate more jobs, the new bill limits weekly hours to 40 hours a week and allows up to 12 hours of overtime. 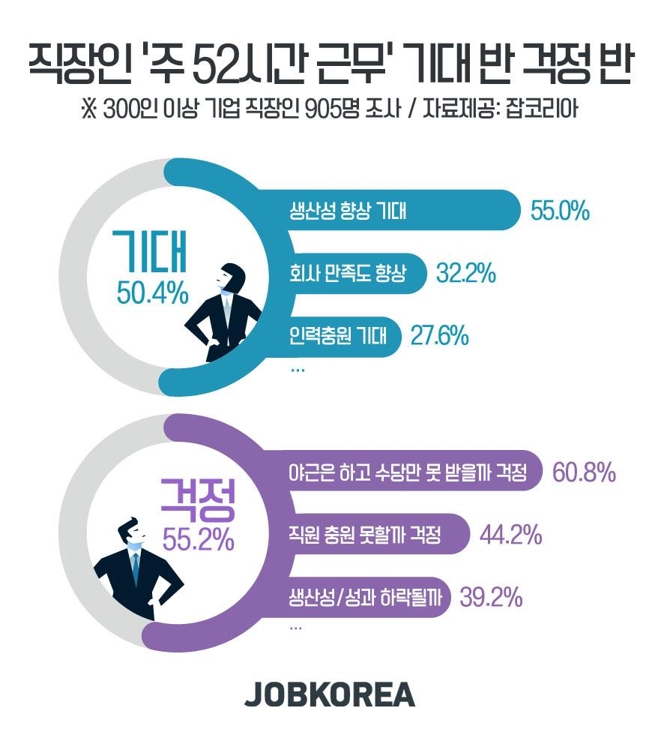