SEOUL, June 11 (Yonhap) -- The minor opposition Bareunmirae Party on Monday made it clear that it will not seek a merger with the main opposition Liberty Korea Party (LKP) after this week's local elections.

It has been speculated that the conservative LKP and the centre-right Bareunmirae Party may merge after Wednesday's local elections as there is a possibility that the Seoul mayoral candidates from the two parties will unify their candidacies.

But the minor opposition party vowed not to join forces with an extremely conservative party that has links to the corruption scandal that led to the ousting of former President Park Geun-hye last year.

"There will be no merger with the LKP after the local elections. I can promise it to the public," Sohn Hak-kyu, the chief of Bareunmirae's election preparation camp, told reporters.

Sohn said that the LKP does not deserve to be the largest opposition party as it only finds fault with the government and the ruling party without providing logical arguments.

"The upcoming elections are aimed at replacing the major opposition party that sticks to the past and at keeping the Moon Jae-in administration in check," he said, appealing for voter support. 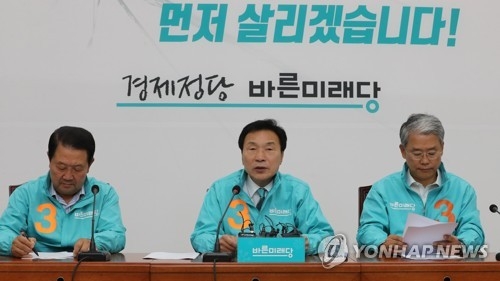