SEJONG, June 11 (Yonhap) -- A foreign virus was the source of two outbreaks of foot-and-mouth disease (FDM) at pig farms in South Korea this spring, the local quarantine agency said Monday.

The Animal and Plant Quarantine Agency (APQA) confirmed that two A-type FMD outbreaks were detected in Gimpo, west of Seoul, on March 26 and April 1, and both had overseas origins. It did not specify any country the virus could have come from.

"The analysis had limitations in comparing the domestic cases with foreign ones as only partial DNA sequencing has been revealed in countries with frequent FMD outbreaks," the APQA said. "We will jointly conduct research with international agencies to figure out the genetic resources and DNA information of FMD."

As it was the first confirmed case in the country of the rare A-type FMD, the agency said it will expand its stockpile of customized vaccines for pigs to deal with future incidents.

FMD is an acute infectious viral disease of livestock that causes fever followed by the development of vesicles chiefly in the mouth and on the feet. It is one of the most infectious diseases for livestock and can spread rapidly if uncontrolled.

It affects cloven-hoofed animals, including cattle, buffalo, camels, sheep, goats, deer and pigs and is prevalent in springtime. 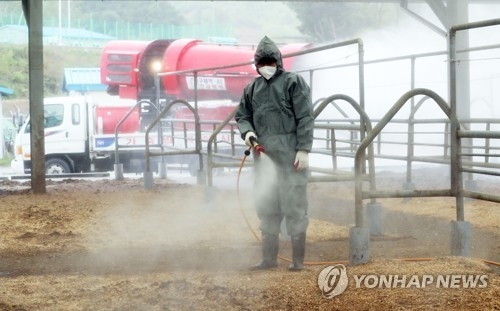