SEOUL, June 11 (Yonhap) -- South Korean political parties on Monday continued to bicker over an allegation of an extramarital affair involving a ruling party gubernatorial candidate and an actress ahead of this week's local elections.

Lee Jae-myung of the ruling Democratic Party (DP) is under fire following his rival's revelation that Lee allegedly committed adultery with actress Kim Bu-seon some years ago while pretending not be married.

He is leading the race for the governorship in Gyeonggi Province, an area adjacent to the capital where about 24 percent of the country's population of 52 million resides.

Lee has denied allegations, but the scandal has shown no signs of abating as the actress continues to accuse him of lying. 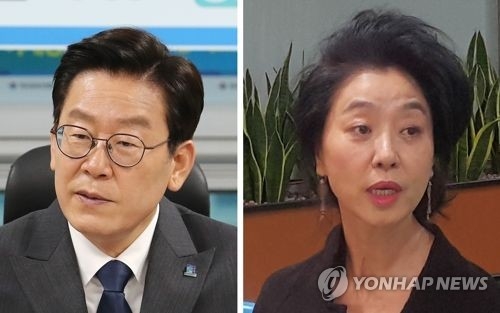 The main opposition Liberty Korea Party (LKP) lashed out at Lee, calling on him to exit the race.

"If Lee tries to cover up the scandal with lies, more disaster will come," Hong Joon-pyo, the chief of the LKP, said on his Facebook page.

The minor opposition Bareunmirae Party said that Lee does not deserve to run for the gubernatorial post, taking issue with his morality.

Choo Mi-ae, the chairwoman of the ruling Democratic Party, defended Lee, seeking to minimize the possible negative impact of the scandal on Wednesday's elections.

"There is a lot of talk about trivial matters. To elect a provincial governor, (voters) need to see how competent he is," she said Sunday.

Lee was a mayor of Seongnam, near Seoul, and ran in the DP primary to pick the presidential candidate in 2017.

He has been widely expected to win the election. Lee has 48.6 percent support, followed by Nam Kyung-pil of the LKP, the current governor, with 19.4 percent, according to the latest pre-election polls released by three TV broadcasters.