The front-page headlines of several newspapers here described their Tuesday summit as "the talks of the century" that may reshape the future of the peninsula and global security.

The showy leaders appear to be willing to have bold negotiations on ridding the secretive communist nation of its nuclear program on a quid pro quo basis.

The U.S. reaffirmed publicly that it won't budge on its ultimate aim.

"We remain committed to the complete, verifiable, irreversible denuclearization of the Korean Peninsula," Secretary of State Mike Pompeo tweeted as the two sides opened working-level consultations in the Southeast Asian nation less than 12 hours before the summit.

The focus is whether Kim and Trump will produce any significant, sustainable breakthrough on denuclearization, beyond mere rhetoric for the sake of a deal and ostensible success of their high-stakes talks.

The world is looking forward to concrete action plans on top of their verbal or written commitments to break away from the past vicious circle of the North's provocations after reaching accords and reneging on them. 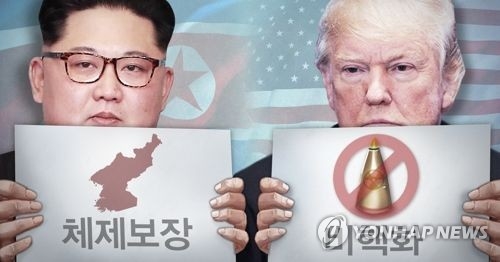 An apparent sticking point is the definition, scope and methods of denuclearization.

The U.S. wants a full and speedy process to locate the North's arsenal and remove it. Trump's aides hope to start it by bringing some of the nuclear warheads out of the country.

Talking formally about "denuclearizing the Korean Peninsula," not just the North, Pyongyang aims to eliminate or weaken U.S. military influence on Korea, especially its "nuclear umbrella" for the South.

It's the key to Pyongyang's top priority: regime security assurances. It desires a peace treaty and the normalization of diplomatic ties first.

If Kim and Trump manage to iron out the differences in a potential Singapore declaration, it would be a feat.

There's a possibility of a surprise joint press conference in case of a substantive compromise. Kim might also hold his own press conference as he has sought to improve his personal image as a statesman.

The North's tangible measures to take at an early stage include allowing IAEA inspectors to return to the Yongbyon nuclear complex, putting its ICBMs and nuclear bombs in the hands of U.S. officials, and presenting the list of clandestine nuclear facilities.

The U.S. will be pressed to offer a set of political and economic incentives, such as sanctions relief, a formal end to the 1950-53 Korean War, a nonaggression pledge and the establishment of liaison offices in a show of sincerity.

A longstanding mutual mistrust is a major stumbling block to a grand bargain.

Some experts set the bar high for the first round.

For the Singapore meeting to be a success, Trump and Kim "will need to agree on a framework for ongoing direct, expert-level negotiations to hammer out the details and time frame for specific action-for-action steps," Daryl Kimball, director of the Arms Control Association in Washington, D.C., pointed out.

He added, "The direct dialogue is overdue, it is historic, and it carries high stakes."

Larry Niksch, a U.S. pundit who has long followed North Korea issues, stressed the importance of a verification-inspection process to prevent the North from cheating.

"It seems to me that President Trump should make the verification principle the big initial test for Kim Jong-un," he said.

Kim and Trump may strike a deal on the framework of a lengthy, complicated denuclearization mechanism and let working-level negotiators continue to handle "the devil in the details."

Past nuclear deals could be a guide, but chances are high that they will engage in the showdown from a zero base. The North signed the 1994 Agreed Framework with the U.S., the 1992 joint declaration with the South on the denuclearization of the peninsula and the six-party joint statement issued on Sept. 19, 2005.

Trump, known for his unorthodox leadership, loathes the agreements with the North under previous administrations. Kim, educated in Switzerland, also admitted to the realistic problems of the old ways reportedly during his recent meeting with Pompeo in Pyongyang.

The Singapore talks may purport to be a "get-to-know-each-other" session with a promise by Kim and Trump to meet again.

"I think the minimum would be a relationship. We'd start at least a dialogue," he told reporters, heading to Singapore following the Group of 7 summit in Canada.

In the case of the worst-case scenario, which would be either Kim or Trump walking away from the negotiations or declaring them a failure, sharp military tensions will be back on.

Trump will resume the talk of maximum pressure and military options, and Kim will restart ballistic missile launches, coupled with war threats.