SEOUL, June 11 (Yonhap) -- South Korean President Moon Jae-in on Monday expressed hope for the success of this week's U.S.-North Korea summit, but said it will only mark the start of a "long process" of denuclearizing the communist state, which he said could take years.

"The deep-rooted hostile relationship and the North Korean nuclear issue cannot be resolved in one single action in a meeting between leaders. Even after the two leaders open the dialogue, we will need a long process that may take one year, two years or even longer to completely resolve the issues," the president said in a weekly meeting with his top aides held at his office Cheong Wa Dae.

"I stress the fact that we need sincere efforts by the South, the North and the United States and the continuous cooperation of other related countries until we complete that process," he told the meeting, according to Cheong Wa Dae pool reports. 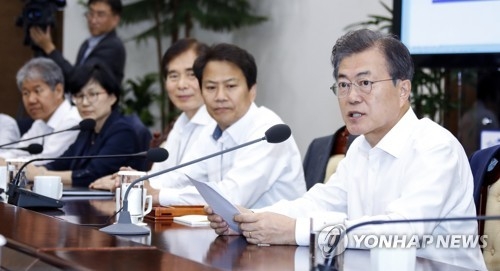 The South Korean president said he had every confidence the summit will be a success.

"President Trump has demonstrated his strong will to resolve the North Korean nuclear issue and establish peace on the Korean Peninsula through his practical actions. Chairman Kim Jong-un, on the other hand, has shown his efforts for the success of the summit and his willingness to denuclearize through bold preemptive measures, including the dismantlement of the Punggye-ri nuclear test site," Moon said.

"I have both expectations and hopes that tomorrow's summit will be a success," he added.

Moon, however, insisted the efforts of the U.S. and North Korea alone may be not enough to finally rid the North of its nuclear weapons.

"To this end, I ask the people to send their continued support for South-North Korean dialogue, including the military, Red Cross and sports talks that will begin this week," he said.

"Our government has successfully created the current situation despite many difficulties. It will continue to do its utmost until the Korean Peninsula is completely denuclearized and a permanent peace regime is established," Moon said.