Trump, who arrived here a day earlier to prepare for the historic summit Tuesday, made the remark at a luncheon with Singapore's Prime Minister Lee Hsien Loong.

"We've got a very interesting meeting in particular tomorrow, and I just think it's going to work out very nicely," he said, according to a pool report. "We do appreciate your hospitality, your professionalism and your friendship."

Senior officials from the two countries met again here earlier in the day to hash out the details of a potential nuclear deal.

The U.S. seeks the complete, verifiable and irreversible dismantlement of North Korea's nuclear weapons program. In return, Pyongyang is believed to be seeking security guarantees for its regime. 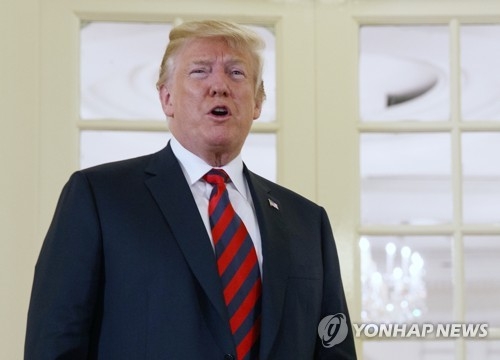 "The President and the entire U.S. team are looking forward to tomorrow's summit," U.S. Secretary of State Mike Pompeo said in a statement. "We have had substantive and detailed meetings to date, including this morning with the North Koreans."

The U.S. delegation to the talks was led by Ambassador Sung Kim, current ambassador to the Philippines and a Korea expert. The North Korean side was led by Vice Foreign Minister Choe Son-hui.

The two sides held multiple rounds of talks at the inter-Korean border village of Panmunjom in the runup to the summit.

"The President is well-prepared for tomorrow's engagement with Chairman Kim," Pompeo continued. "The U.S. position remains clear and unchanged."

Trump said last week that he felt "very well prepared" but also didn't think he had to prepare very much.

"It's about attitude. It's about willingness to get things done ... So this isn't a question of preparation; it's a question of whether or not people want it to happen, and we'll know that very quickly," he said.

Pressed on whether he was serious about not needing to prepare, he denied that he had said that.