SEOUL, June 11 (Yonhap) -- In an unusual move, Pyongyang's media have disclosed that the airplane used by leader Kim Jong-un over the weekend to fly to Singapore for summit talks with U.S. President Trump was from China.

The Korean Central News Agency and the Korean Central Television reported Monday that Kim departed from Pyongyang on Sunday morning via a Chinese chartered airplane to hold a summit with his U.S. counterpart in Singapore. The reports also noted that Kim boarded the Chinese plane at Pyongyang's airport after exchanging greetings with well-wishers.

On the same day, the Rodong Sinmun, the organ of the ruling Workers' Party, also carried 16 related color photos, including one in which Kim waves at the entrance to an Air China plane featuring the Chinese national flag after a send-off ceremony in Pyongyang. At first glance, it seems that a Chinese leader is embarking on an overseas trip. 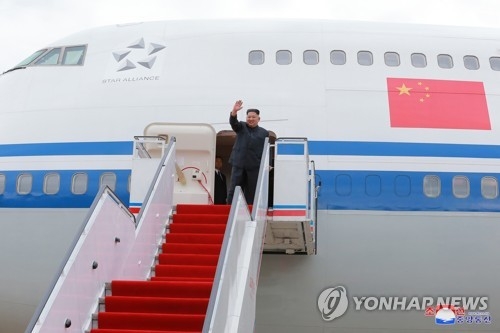 Analysts say it is very uncommon for Pyongyang's media to reveal the charter of a foreign airplane in its leader's overseas trip, particularly because the North Korean government has long promoted the Juche (self-reliance) ideology and slogans in all state affairs.

They speculate that the frank disclosure may have been made due to Kim's tendency of putting practical interests above loss of face and self-esteem.

There is also an analysis that Pyongyang has intentionally revealed the charter of a Chinese airplane to display a close bilateral relationship in the face of international sanctions led by the U.S.

"Kim who is known as a reasonable leader may have accepted his advisers' recommendations to prioritize safety in aviation," said Yang Moo-jin, a professor at Seoul's University of North Korean Studies. "In addition, the charter of a Chinese airplane may have an effect of publicizing China's active support and cooperation to the North Korean people ahead of summit talks with the U.S."

Meanwhile, a Hong Kong newspaper reported that the Boeing 747-4J6 plane chartered by the North Korean leader has been used by Chinese Premier Li Keqiang for his overseas trips.