After opening a tad higher, the index saw choppy trade, fluctuating between positive and negative terrain.

But institutions drove the index upward by scooping up a net 282.1 billion won in local shares, while foreign and retail investors dumped 9.8 billion won and 258.6 billion won worth of holdings.

"Despite uncertainties, the planned summit seems to serve as a positive source for the market at least for now, as investors expect such peace events to have a positive impact on the Korean market both in short and long-term perspectives," said Noh Dong-gil, an expert at Shinhan Securities.

On Tuesday, U.S. President Donald Trump and North Korean leader Kim Jong-un will hold a historic summit in Singapore for a showdown on the North's nuclear ambitions.

Shares of infrastructure-related companies, such as builders, steelmakers, and electric firms, had a bullish day as they are expected to benefit from a thaw in inter-Korean ties and the subsequent increased chances for joint development projects.

The South Korean currency closed at 1,075.20 won against the U.S. dollar, up 0.7 won from the previous session's close. 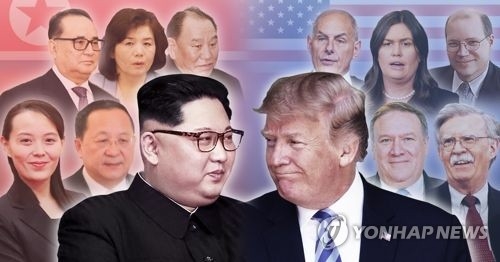