DONGHAE, South Korea, June 11 (Yonhap) -- A North Korean fishing boat was rescued while floating in waters off South Korea's east cost on Monday, and all five of its crew members have expressed their desire to go back home, officials said.

A South Korean fishing boat alerted authorities after spotting the North Korean boat floating about 118 nautical miles off the east coast city of Sokcho around 6:20 a.m. The Coast Guard dispatched a patrol vessel and rescued the boat, which was suffering from an engine problem.

After questioning the five crew members, authorities determined that they didn't intend to defect.

"As far as I know, it's not that they crossed into the South to defect. It appears that they expressed their desire to go back," a government source said on condition of anonymity. "We need to clearly determine their intention through questioning."

If it's confirmed that the crew members want to go back, the government notifies the North of its plan to repatriate the boat and its crew members and hand them over to North Korean authorities at sea. 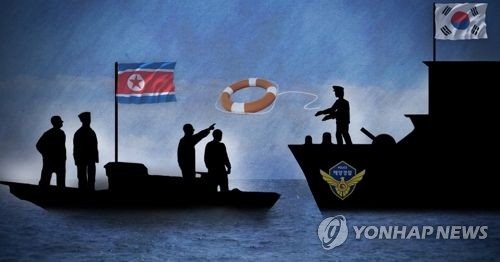