In their phone conversation, Singaporean Foreign Minister Vivian Balakrishnan briefed his South Korean counterpart, Kang Kyung-wha, on his recent trip to Pyongyang, according to Kang's ministry.

He also informed Kang of the results of a meeting between the North's leader Kim Jong-un and Prime Minister Lee Hsien Loong in Singapore a day earlier.

The minister told Kang that his country will put in its best diplomatic effort for the success of Kim's historic summit with President Donald Trump slated for Tuesday.

He vowed to maintain close partnerships with South Korea as well.

Kang appreciated Singapore's role in summit preparations and stressed the need for continued cooperation with the South.

Singapore is known as a neutral diplomatic player. Both Koreas have embassies there. 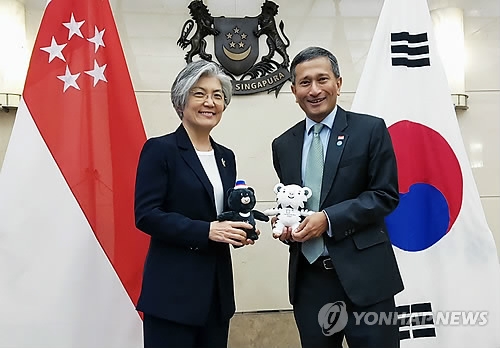