The East Asian-Australasian Flyway Partnership (EAAFP), a regional platform that aims to conserve migratory waterbirds, held a press conference in Incheon, west of Seoul, to brief South Korean governmental organizations, NGOs and wildlife experts on its cooperative projects with the North to help Pyongyang address its nature protection issues.

Lew Young, chief executive of the EAAFP Secretariat who made a trip to Pyongyang last month, said the EAAFP has implemented various projects with the North to protect migratory birds and wetlands since 2015 and that North Korean officials are now increasingly aware of the importance of sustainable development.

North Korea acceded to the International Union for Conservation of Nature last year and became the 36th member of the EAAFP in April this year. The EAAFP currently has 36 partners, including 18 governments, six intergovernmental agencies and 11 international non-governmental organizations. 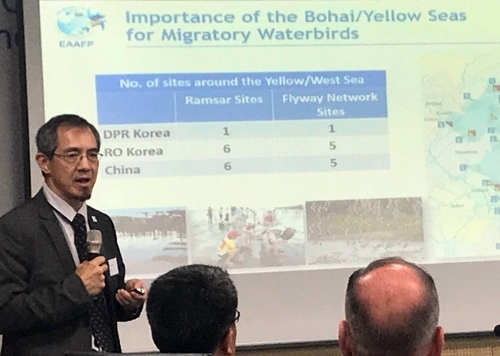 Last month, two North Korean sites -- Mundok Wetland Reserve in South Pyongan Province and Rason Wetland Reserve in North Hamgyong Province -- were included in Ramsar Convention, an intergovernmental treaty on the conservation of important wetlands. Under the treaty, adopted in 1971 in the Iranian city of Ramsar and officially called the Convention on Wetlands of International Importance, member states have agreed to designate wetlands, rivers, lakes, tidelands, seaweed beds and coral reefs as sites of global significance.

According to Lew, the North Korean government has treated Mundok Wetland Reserve as a model case of conserving the country's wetlands and pushed ahead with a project to increase the number of wetlands designated in a 1998 list to 55 from 34 by October.

An official at the Hanns Seidel Foundation, a German aid organization that is working with the EAAFP on North Korea-related projects, said 20 North Korean forestry experts are training in China and Mongolia to learn how to preserve forests and that the North is making preparations for the enactment of laws incorporating environmental protection clauses.

The official also said he had to tell North Korean residents that the protection of migratory birds is for the conservation of wildfowl, as he was asked during a 2016 industrial fair in North Korea's Rason special economic zone if it was for the selling of birds. "But recent news on North Korean TV carries the importance of wetlands, reflecting North Korea people's enhanced awareness of environmental protection," he said.

During Monday's press conference, NGO officials expressed their interest in the outcome of the United States-North Korea summit scheduled for Tuesday in Singapore, as well as in the North's potential change following the historic summit.

Lew said the EAAFP is calling the North's attention to cases of other countries that have faced a serious environmental pollution as a result of rapid economic growth to help it understand the importance of sustainable development. He hoped a success in the Washington-Pyongyang summit would give a boost to funding for the protection of North Korea's environment, leading to the conservation of the environment in the Northeast Asian region.