Jung Sung-leep also said he expects Daewoo Shipbuilding to receive US$7 billion worth of orders by the end of this year, which is close to the initial order target of $7.3 billion.

"We are making efforts to secure orders for offshore facilities for the rest of the year, which if realized, could help us surpass the order target," Jung said during a news conference at the company's headquarters in central Seoul.

As of the end of May, the shipbuilder had $22.4 billion worth of orders, or 96 ships, in its order backlog, which would keep its shipyards busy until the third quarter of 2020.

Still, he identified rising shipbuilding plate prices and the won's strength against the dollar, which affects the vessels' export prices, as major challenges ahead for the company's bottom line.

Jung also said he expects the shipbuilder to deliver two drill ships to Sonangol by the end of this year, citing a change in the management of the Angolan state oil firm.

"The Angolan president appears to have instructed Sonangol to receive the ships within this year," Jung said. Daewoo Shipbuilding could receive about 1 trillion won in payment from the Angolan oil firm for the delivery of the two ships.

The delivery had been originally scheduled for June and July in 2016 but was delayed due to Sonangol's worsening financial status.

Daewoo Shipbuilding said it hopes to sell Samwoo Heavy, which makes ship parts and on/off shore products, at around 20 billion won as some firms expressed interest in buying the company, though it did not provide details. 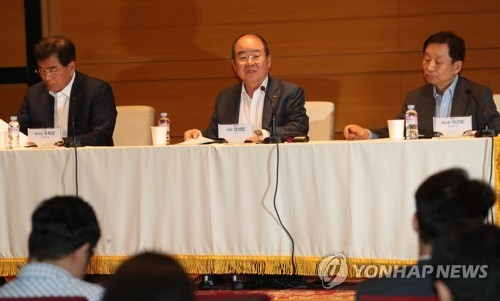