"The South Korean economy seems to continue to pull off steady expansion (in the second half)," Bank of Korea (BOK) Gov. Lee Ju-yeol said in a ceremony at its Seoul headquarters celebrating the 68th anniversary of the central bank. "I think it is necessary to keep an accommodative monetary policy stance as inflation pressure is not so strong on the demand side."

The BOK raised the rate by a quarter percentage point in November last year for the first time in six and a half years. But the central bank has held the base rate steady at 1.5 percent since then, citing low consumer prices and some signs of economic downturn.

South Korea posted a monthly inflation of 1 percent in January, marking the lowest figure in 17 months. It has been hovering around 1.5 percent through May, lagging far behind the BOK's target inflation of 2 percent.

Also, the country's job creation remains weak in recent months, driven by a sluggish manufacturing industry, amid restructuring in the labor intensive shipping and automotive sectors.

But the top monetary policymaker said Asia's fourth-largest economy is expected to expand 3 percent this year thanks to strong economic fundamentals and modest private consumption.

Weeks ago, he said it has become "hard to be optimistic," fanning concerns about an economic downturn.

"I mentioned it in order not to let our guard down in the time of heightened uncertainties," Lee told reporters after the ceremony. "The economy is on a steady path to meet the 3 percent growth target by the end of 2018."

Many are worried that a rate hike in the market interest rate may place larger financial burdens on money borrowers and lead to a contraction in domestic consumption.

"The BOK will pay heed to possible financial imbalances and seek ways to expand policy tools to better deal with business cycles," said Lee. "And I will be more cautious on monetary adjustments after looking carefully into the financial environments." 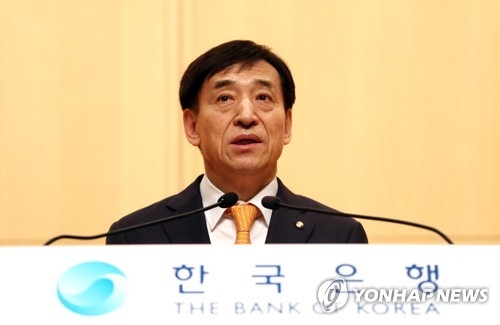