SEOUL, June 11 (Yonhap) -- Prosecutors have started looking into allegations that a dozen North Korean restaurant workers were brought into the South against their will in 2016 in a political maneuver by the then-Park Geun-hye government, a lawyers group said Monday.

The Lawyers for a Democratic Society, better known as Minbyun, filed a complaint last month against former senior officials claiming they engineered the planned mass defection.

The group said the Seoul Central District Prosecutors' Office asked two of its members to appear for questioning next Monday.

In April 2016, the manager and 12 female North Korean restaurant workers defected to the South. Park's government said they came of their own free will, but rumors have persisted that the defection may be the work of the National Intelligence Service (NIS).

North Korea has demanded their repatriation, claiming that they were abducted for political purposes.

The defection was announced by the NIS just before the parliamentary elections, when voter sentiment was seen as unfavorable to the ruling party.

A cable TV network recently aired an interview with the restaurant manager, who said he threatened his employees to come with him to the South at the instruction of NIS agents. 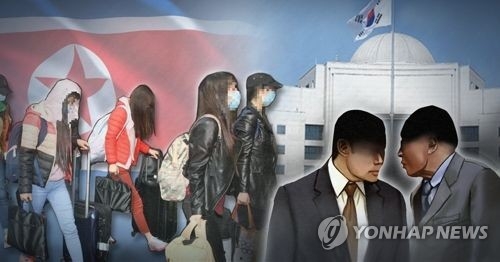