SINGAPORE, June 11 (Yonhap) -- North Korean leader Kim Jong-un left his hotel possibly for a nighttime tour of Singapore on Monday, the eve of his summit with U.S. President Donald Trump.

Kim was seen leaving St. Regis Hotel at 9:04 p.m., accompanied by top officials, including his sister Kim Yo-jong and Ri Su-yong, a senior official of the ruling Workers' Party.

The Straits Times earlier reported that Kim will take a mini city tour. Among the expected stops along the way are Marina Bay Sands SkyPark and the Esplanade, it reported.

In the afternoon, the Singaporean authorities were seen tightening security around St. Regis Hotel, where Kim has been staying since his arrival on Sunday. 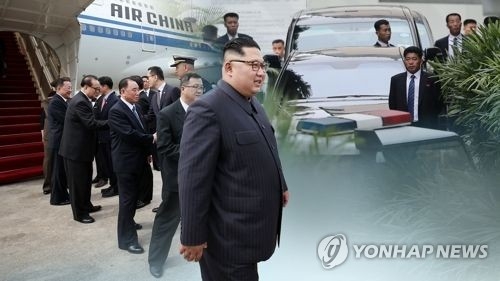