South Korea, led by head coach Shin Tae-yong, gave up two goals in the second half in a match played behind closed doors at Das.Goldberg Stadium in Grodig, Austria. This was South Korea's last tuneup before they head to their World Cup base camp in Saint Petersburg, Russia, on Tuesday.

South Korea posted one win, one draw and two losses in four matches since Shin announced his provisional roster on May 14.

The Taeguk Warriors started with a 2-0 win over Honduras on May 28, but fell 3-1 to Bosnia and Herzegovina on June 1 at home. After cutting three players for the final 23-man team and arriving in their pre-World Cup training camp in Austria, South Korea collected a scoreless draw with Bolivia on Thursday, followed by Monday's loss to Senegal.

South Korea gave up the lead with an own goal in the 56th minute after Pape Alioune N'Diaye's cross deflected off a defender and into the net. South Korea were then further punished in the 77th when Moussa Konate converted a penalty kick.

South Korea are in Group F at the World Cup with Sweden, Mexico and Germany. Senegal are in Group H with Poland, Colombia and Japan. 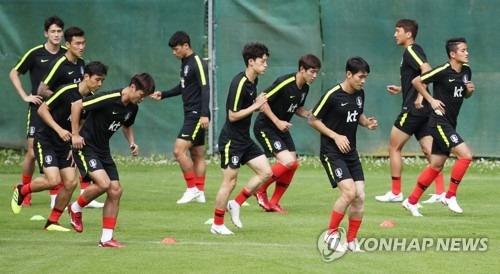