South Korea have been training in Leogang, Austria, since June 3 with their World Cup squad of 23 players. They will depart for their World Cup base camp in Saint Petersburg, Russia, on Tuesday.

Before flying to Russia, where they will face Sweden, Mexico and Germany in Group F, Shin said he is satisfied with what his team has worked on in Austria, although it didn't collect good results in friendly matches. South Korea were held to a scoreless draw by Bolivia last Thursday and suffered a 2-0 loss to Senegal on Monday.

"I would give 100 points to the training facilities and environment here, but in terms of mobility, it wasn't that good," Shin told reporters in Leogang. "If we consider transportation, I would probably give 80 points, but other things, including our residence, were all good." 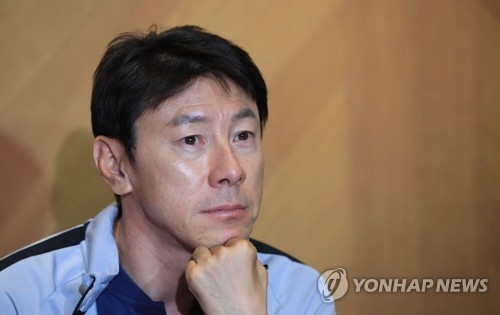 Shin was criticized for testing his tactics and players even though the World Cup was only about a week away. The 47-year-old rebutted such criticism, saying he wasn't doing any testing in recent friendlies.

"Those who look from the outside just say that I'm doing experiments, but it really wasn't the case," he said. "I'm figuring out how I should use this particular player in the next match and how I should make substitutions. I'm just in the process of making a team."

In their final World Cup tuneup played behind closed doors, South Korea were blanked by Senegal, also a World Cup contestant in Group H. Shin said his side had prepared for that friendly with their first Group F opponent, Sweden, in mind.

"Senegal also use 4-4-2 like Sweden, but they have a different style," he said. "Senegal have good players who have pace and power, and it was difficult for our defenders to win one-on-one battles."

Shin previously said that his team planned to test all they had against Senegal, including set pieces, but it turned out South Korea didn't disclose all of their options.

"Because our game plan could be leaked to others, we only did basic set pieces," he said. "Once we play our first World Cup match, we will show what we've worked on in set pieces against tall Swedish players." 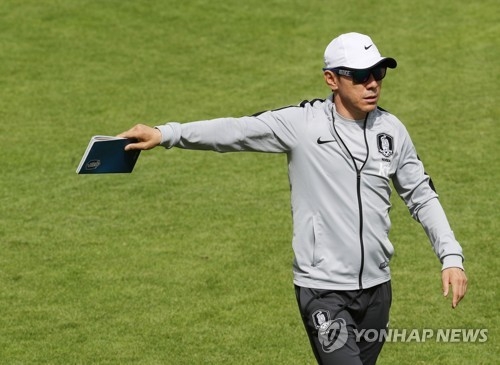 South Korea will face Sweden in Nizhny Novgorod, Russia, next Monday. While many pundits have pointed out that South Korea's Group F against Sweden is the most critical match for their bid to reach the round of 16, Shin said he is confident of delivering good results.

"I've watched how Sweden play and analyzed about 10 matches," he said. "If we can manage to contain their players and create our chances, then we may get some good results."

"Forsberg plays as left wing forward, but he is more like a second striker in matches," he said. "He doesn't really play in the flanks, but mostly in the center. I have noticed it, and I hope our players can also recognize his style."

Although his team didn't collect meaningful friendly results in Austria, Shin said he will try to meet fans' expectations at the World Cup.

"I'm not going to be nervous, and I'll try to encourage our players to do well," he said. "I want to win and want to show that we've worked hard."

Shin said although local elections and the North Korea-United States summit this week are taking people's attention away from football, he believes the national team can boost popularity of the sport again.

"If we play well against Sweden on June 18, I think people will pay more attention to football," he said. "If we can deliver results and performances, we can create a football boom again. We have no options but to make it happen on our own."