SEOUL, June 12 (Yonhap) -- KBS 2TV's "The Miracle We Met," which aired its finale on May 29, topped the weekly TV chart, data showed Tuesday.

The miraculous story about an extremely confused man whose life is upended overnight garnered a score of 259.6 on the weekly Content Power Index (CPI) for May 28-June 3.

Written by popular scriptwriter Paik Mi-kyung of "Strong Girl Bong-soon" and "The Lady in Dignity," "The Miracle We Met" tells the story about the man who has to live in the body of a complete stranger with the same name, age and birthday but a completely different life. 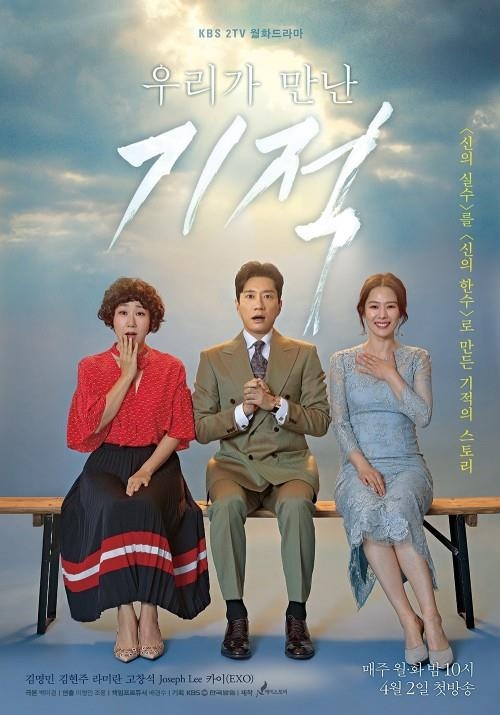 Actor Kim Myung-min, who played lead character Song Hyun-chul, exceeded public expectations -- as always -- in performing the confused man who is forced to live someone else's life and makes a dramatic change in character.

For boy band EXO fans, Kai's appearance -- albeit short -- was enough to tune in and watch the show. As a stunning scene-stealer, the singer played Ato the Messenger, who makes a fateful mistake that turns Song Hyun-chul's life upside down.

The drama bowed out with the highest viewership rating of 13.1 percent, beating all other programs aired in the same time slot of 10-11 p.m. on Monday-Tuesday, according to Nielsen Korea.

The series is followed by MBC's reality show "I Live Alone," with a CPI score of 237.1, and "Radio Star," a talk show on the same channel, with 235 on the weekly chart.

'The Miracle We Met' concludes on top of weekly TV chart

'The Miracle We Met' concludes on top of weekly TV chart