SEOUL, June 12 (Yonhap) -- Loans in the accommodation and food services sector are increasing as the industry is in a deep slump, central bank data showed Tuesday, a warning sign that the quality of the debts and personal credit ratings are worsening in the process.

Industry watchers say the debts are accompanied by an industrywide slump, suggesting that loans are not being used in business investment or expansion.

Separate data from Statistics Korea measured the industry's production index at 93.7 at end-March this year, the lowest since the 90.9 measured at the same time in 2005. The base year used in the measurement is 2015.

The accommodation and food services have been sliding from oversupply as people of the baby boom generation, now retiring in big numbers, open hospitality businesses because they are more easily accessible. Business in the first quarter was still in a steep slump from a sustained ban on Chinese travelers to Korea, as well as fine dust that kept people indoors. 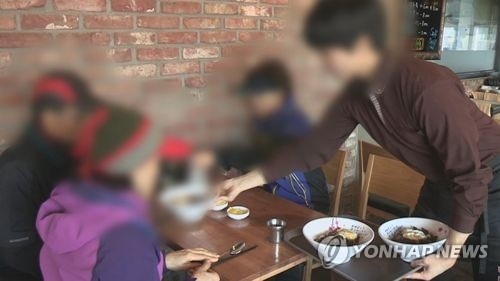 "The cost for shop owners is rising from the hike in lease fees and minimum wage and higher prices for agricultural and fisheries products, while the economy is not picking up greatly," Cho Young-moo of the LG Economic Research Institute said. "(The data) suggest that there are many accommodations and restaurant businesses that are sustained by loans."

Borrowers' credit ratings were also weakening. Statistics from the Financial Supervisory Service showed that 14 percent of people in the accommodation and eating sector were in the low credit group, compared with 12 percent in retail, 10 percent in manufacturing, 9 percent in wholesale and 2 percent in property rental.

Cho of the LG Economic Research Institute said there are already signs of a balloon effect as borrowers resort to credit loans as the government tightens screening for loan applications.

"More people could be pushed out from the loan system and forced to close shop unless the currency policy of tight regulations on loan extensions change, given the still high demand for loans," he said.
(END)