SEOUL, June 12 (Yonhap) -- South Korean parties made last-ditch efforts to appeal for voter support Tuesday, one day ahead of the local elections and parliamentary by-elections, which are seen as a barometer of public sentiment toward President Moon Jae-in.

Up for grabs are 4,016 local administrative, legislative and educational posts, including 17 metropolitan mayors and provincial governors. The by-elections also will be held to fill 12 vacant parliamentary seats.

The local elections will be held Wednesday from 6:00 a.m. to 6:00 p.m. at 14,134 polling centers nationwide, according to the National Election Commission (NEC).

Turnout for the latest two-day early voting came in at 20.14 percent, which meant more than 8.64 million out of 42.9 million eligible voters have cast ballots, according to the National Election Commission (NEC).

A higher-than-expected turnout for the advance voting is drawing attention on whether turnout for Wednesday's elections could surpass 60 percent.

Rival parties ramped up their campaigns Tuesday to win the hearts of undecided voters. 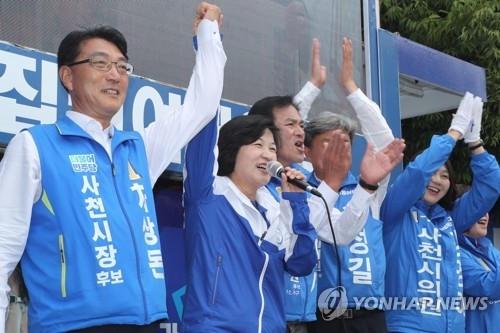 The ruling Democratic Party (DP) will spend the final day of the campaign period on appealing for overwhelming support in five major cities that range from the southeastern port city of Busan to Seoul.

The main opposition Liberty Korea Party's Tuesday campaigns will be focused on Seoul and its adjacent areas.

Pre-election polls showed that the DP is widely expected to win on the back of strong public support for President Moon and his drive for peace with North Korea.

A historic summit between U.S. President Donald Trump and North Korean leader Kim Jong-un set for Tuesday in Singapore is viewed as a boon for the liberal DP.

Rival parties have gauged impacts of the U.S.-North Korea summit as the local elections could be overshadowed by the unprecedented summit.

Parties appeal for support on final day of election campaign

Parties appeal for support on final day of election campaign